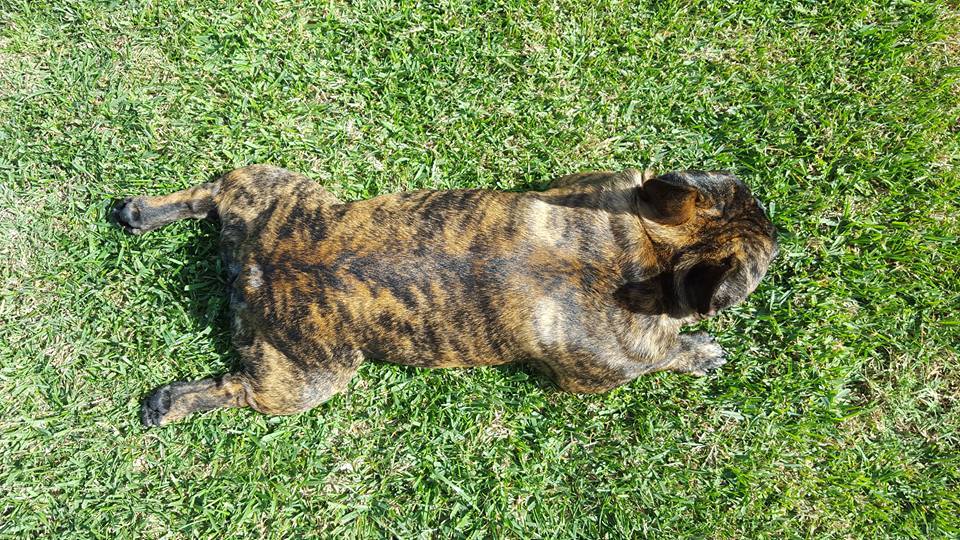 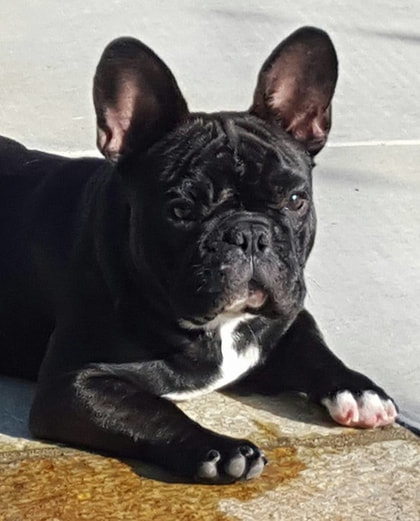 Chocolat Moose
Moose is another 3rd generation pup out of Maivis and GomezBullyz's Chuck Norris. He is Charlie's full brother from Maivis' second litter. Moose is an unusual, rare seal brindle with a black mask and points. Just love his three white toes on his left front paw and single white toes on both hind paws. He has a lot of wrinkles on his fantastic head. He is maturing nicely into a very handsome stud. Moose sired his very first litter of 7 beautiful, healthy puppies on June 10th! Nice variety of colors! 3 Brindle pied, 1 Dark Red Fawn with Black Mask, 1 Light Fawn with Black Mask, 1  Seal Brindle and 1 Black Brindle. 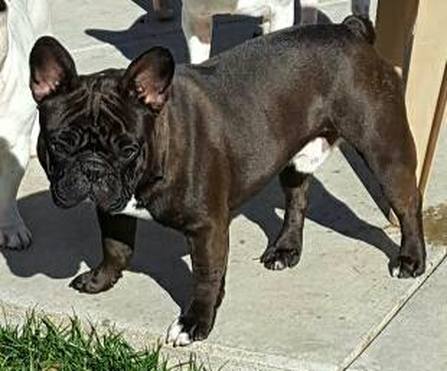 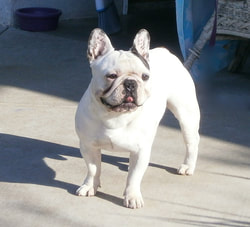 TOM TURKEY STEW
Tommy is our second generation stud available, sired by our very own Stewie and out of our beautiful, female Madison.  He is a handsome white, brindle pied boy with an exceptional head, conformation and athleticism.  He definitely got the best of both parents.  His personality is both sweet and a little mischievous.  He has a brindle spot on his tail head, left temple and has black "eyeliner  or mascara" on his left eye.  He has three ropes on his flat nose and lots of wrinkles.  He carries the red fawn gene as well as the black mask gene and should produce a variety of colors.  His full sister delivered her first litter this past winter and produced a chocolate female which means Tommy may carry the chocolate gene as well.  He does have light eyes like his momma.  Tommy's DNA is: BB, DD, Ee, kbr/ky, Ay/Ay.  We are anxious to see what he will produce in the near future. 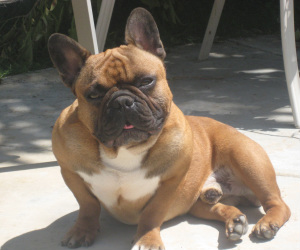 S.O. STIRRING ﻿THE﻿ POT
Stewie is our foundation stud and what a stud he was!!  He is an AKC and APRI registered male with many European and American champions in his pedigree including CH. Szabovari Ad-Astra Joker, CH. Truhali Skywalker at Glenlee, CH. Zack Van Chartreuzemeers, CH. Shark Brandy and CH. Baxters Sam the Sham.  Stewie is a handsome, mahogany fawn with a black mask and is a blue carrier (Dd).  DNA tested and profiled.  Stewie is a proven stud with many litters of 4-5 pups sired in the last four years and has produced a variety of colors.  In the summer of 2013, he even produced a litter of 9.  He has a huge, muscular build with an outstanding head and lot of wrinkles.  His personality is very laid-back with no cares in the world. He is such a lover and enjoys our cuddle sessions.
.